He is all over the place, looking after every corner of every street, but who is Saint Blaise actually? Besides being the city’s patron saint, Saint Blaise is one of the most important symbols of Dubrovnik. To make you appreciate him as much as locals do, we prepared five fun facts about his life!

1. Saint Blaise rescued the city from Venetian invasion!
The legend says that in the night of February 2nd in 971, Venetian ships floated close to the city walls planning to invade the Republic of Ragusa (today known as the city of Dubrovnik). After taking a night walk, the city’s pastor named Stojko went to the church of Saint Stephen where an old man introduced himself as Saint Blaise and told Stojko that Venetians were intending to attack the city during the night. Surprised by the old man’s warning, Stojko informed the city council and managed to quickly prepare everything for a defence. Realising that the plan won’t work, Venetians withdrew and inhabitants of Dubrovnik started to celebrate the magnificent salvation of the city and proclaimed Saint Blaise as their patron. The day that followed, 3rd of February became the feast day of Saint Blaise. The Festivity has been held for over one thousand years and, for people of Dubrovnik, it’s one of the most important days throughout the year. In 2009 UNESCO formally recognised it as an example of the Intangible Cultural Heritage of Humanity.

2. Saint Blaise was a healer from Armenia!
It’s a common belief that Saint Blaise was born in the middle of 3rd century in Sebastea in historical Armenia (modern day Turkey). At a young age he became a famous doctor and healer, well known for adding a sign of the cross after treating his patients. He was also a bishop of Sebaste which is why he had to run away to the woods when Roman army invaded his hometown threatening to kill all Christians. The legend has it that St. Blaise lived with wild animals and successfully communicated with them. When the Romans finally caught him, Saint Blaise refused to give up on his faith which is why he was beheaded. 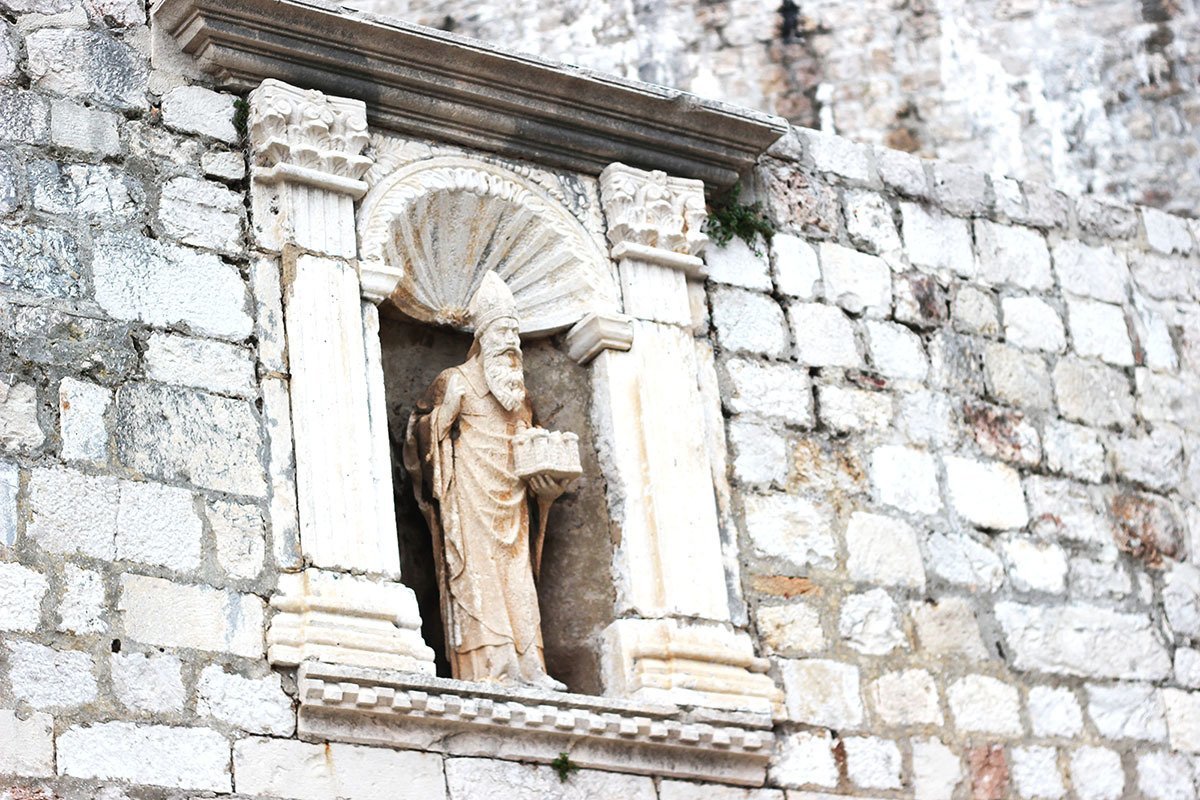 3. Symbols of Saint Blaise are all over the city!
Saint Blaise can be found in every inch of Dubrovnik. Not only that his statue welcomes all of the visitors at every entrance to the city and that he’s present on the city’s flag, but there is also a church named after him. Originally built 14th century Romanesque, the Church of Saint Blaise was destroyed after the earthquake in 17th and fire in early 18th century. It was rebuilt in baroque style between 1706 and 1714.

4. Saint Blaise cures illnesses of the throat!
According to the legend, Saint Blaise once saved a child that almost died because of the fishbone stuck in his throat. This is the reason why he was invoked for protection against

injuries and illnesses of the throat. Nowadays the blessing of Saint Blaise is given on the feast day in February and in contains the following prayer: “May Almighty God at the intercession of St. Blaise, Bishop and Martyr, preserve you from infections of the throat and from all other afflictions”.

5. On the feast day of Saint Blaise, prisoners walk freely!
On February 3rd, the city of Dubrovnik becomes crowded with people from all over the world. This day was especially respected by prisoners in the time of the Republic of Ragusa. Each offender, a convict and exile was allowed to come to town two days before and two days after the holiday without being held accountable for their crimes. This was later prolonged to seven days before and seven days after the feast day. This tradition disappeared when the Republic of Ragusa was invaded by the French army.