Ajvar (pronounced eye-var) has always been my favorite among all the jar-packed goodies. It is a traditional Croatian roasted pepper mixture, sometimes referred to as a vegetarian caviar. It’s actually typical for the cuisine of the entire Balkan area. Don’t confuse ajvar with pindjur, which contains more eggplant and tomato and is more of a relish. The type of pepper used for ajvar is called roga, meaning horned — it is large, red, horn-shaped, with thick flesh and relatively easy to peel. It typically ripens in late September. 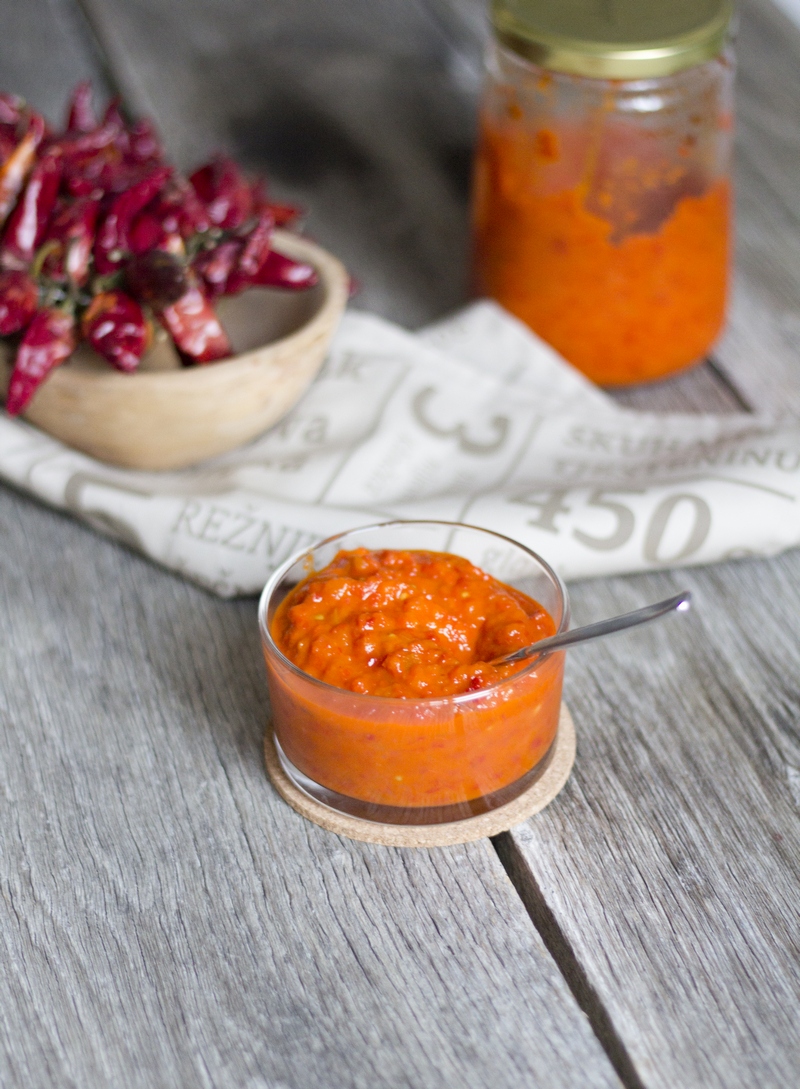 However, you can use any other type of pepper, the colour doesn’t make a difference in taste, but it will result in a different colour of the spread. Also, eggplants are used to balance the sugary taste of peppers with their bitter-sweet flavor. You can make ajvar sweet or very hot. Eventhough its smoky flavor is a great match for grilled or roasted meats, especially lamb, there aren’t too many rules when it comes to ajvar, including how you serve it. You can have it as a condiment with grilled fish and meats, added to a sandwich for some oomph, or just slathered on a cracker with a drizzle of olive oil and a crumble or smear of whatever goat or feta cheese you can get your hands on. 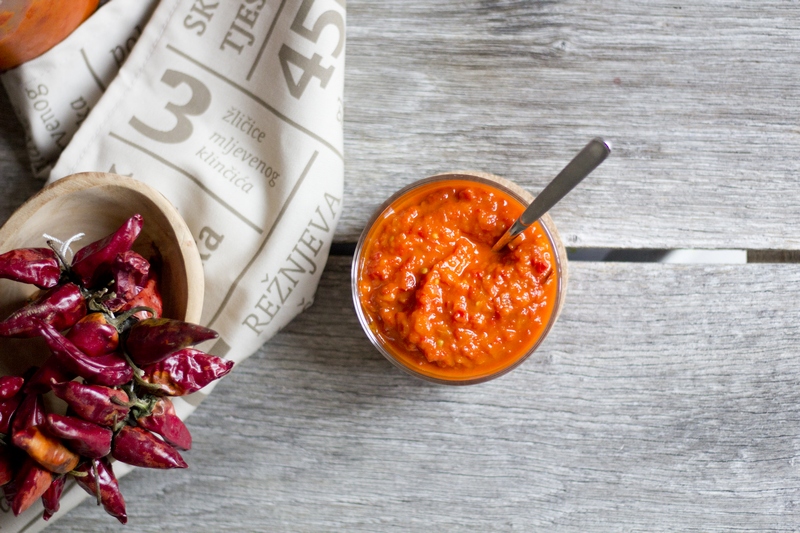 The recipe is usually passed down from generation to generation. It is quite a bit of work, but the final outcome is so worth it. Most of the work involves roasting all the eggplants and peppers. The easiest way to do this is to use your BBQ grill. Peppers and eggplants are grilled until they are charred, then the skin is peeled off and the seeds removed. The baked peppers must briefly rest in a closed dish, allow them to cool and allow the flesh to separate from the skin. The peppers are ground in a mill (you can use your blender) and finally, the mush is stewed for a couple of hours in large pots, with added sunflower oil, in order to condense and reduce the water, as well as to enhance later conservation. A lot of recipes call for garlic and onion. Salt and vinegar are added at the end. My mom always adds some chili pepper to make it spicier. You can adjust chili peppers and salt to your taste. Hot ajvar is poured directly into glass jars which are immediately sealed.

To grill the eggplants, make sure you poke holes with a knife so they don’t explode. Grill them until soft and charred. After the eggplants have cooled off, remove the peel using a knife. If you have cooked them enough, the peel should come off easily. Do the same with peppers. Let cool and remove all the peel and seeds and wash them well.

Place the eggplant in a colander and let any excess water drain off. Do the same with the peppers. This may take about half hour or so.

The next step you can do in small batches, depends how big your food processor is (you can also use the mill), but place some eggplant and pepper, garlic cloves and chili peppers into the food processor and pulse a few times until they are finely chopped.

In a very large pot heat the oil.

Add peppers and eggplant and stir using a wooden spoon. Add salt and vinegar and cook stirring. This will require 3 hours of cooking over low to medium heat, stirring occasionally so that it doesn’t stick to the bottom of the pan.

In the meantime, boil the jars in hot water for about 10 minutes. After that, just before the spread is ready to be canned, place the jars lids off in the oven at 180 F degrees for 10 minutes. Take them out and carefully fill the jars so that there is about an inch left from the top, place the lid onto the rim and twist on the screw band until it’s tight. Place the jars back in the oven and continue baking for another 15 minutes, after which you can turn off the oven, and let them cool in there. 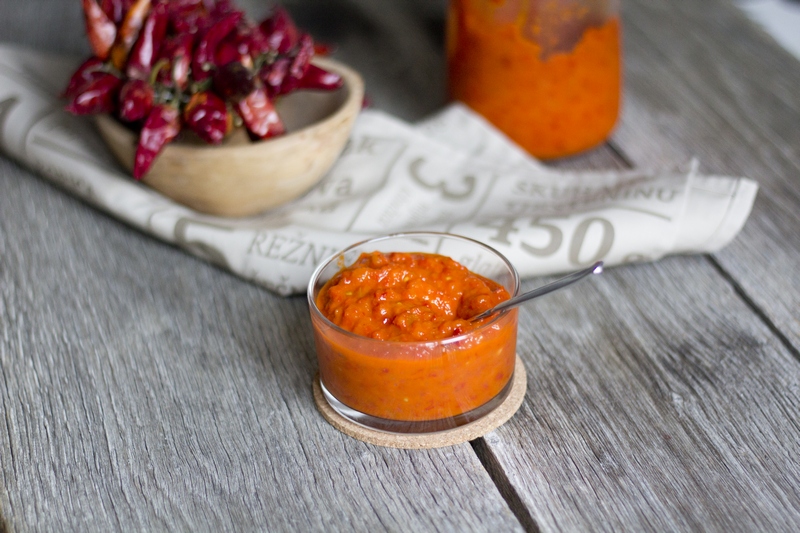 Your ajvar is ready.