You are not mistaken – it is a heart, a heart that has kept its secret for thousands of years and has suddenly been recognized for its romantic significance! There are said to be two other heart-shaped islands in the world – but only Galešnjak can claim to virtue of constancy, since its shape  is not altered by tide or the furies of the Velebit bura.

Situated in the Pašman chanel, between the island of Pašman and the town of Turanj, near Zadar, it appears without distinction, simply one island among many, until you take the perspective of a seagull (or more realistically of Google Earth) when its true form and significance emerges.

Galešnjak is a heart-shaped island, also called the Island of Love or Lover’s Island. It is one of the worlds few naturally occurring heart-shaped objects. The island has a surface area of 0.132 km2, with a shoreline of 1.55 km in length. The island features two peaks, the highest of which is 36 m high above sea level. 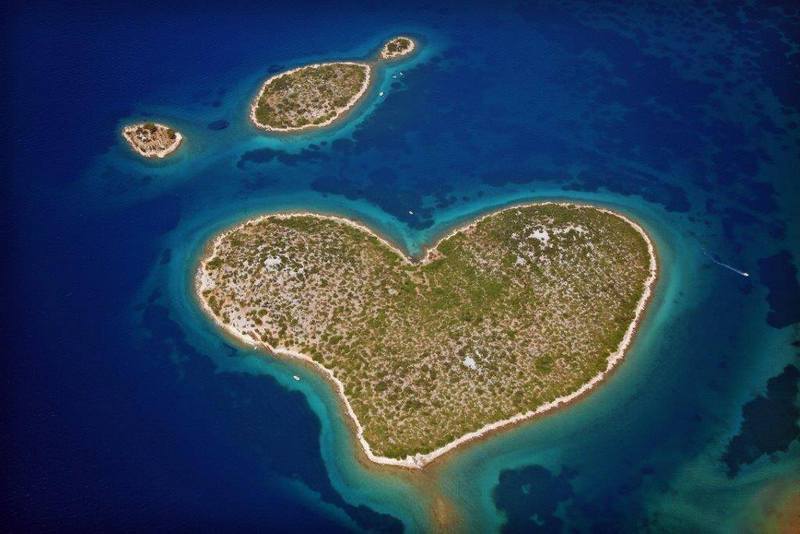 The island has recently suffered the indignity of two bulldozed scars – but the owner insists this is only as a result of his plans to plant some olive trees and eventually to enhance the romantic atmosphere.

The island has some small pebble beaches, they are not the best kept beaches on the planet, but they are good enough for a romantic swim. Galešnjak is surrounded by the emerald-blue waters of the Pašman channel. They give it an idyllic, paradise-like feel. It is this atmosphere which makes all who visit Galešnjak not wish to leave.

Galešnjak is a must-visit island in Croatia for anyone who desires to share a memorable moment with their soul mate. The island is the perfect place to chill out, camp, picnic, swim and share amorous moments. The island is privately owned and so permission has to be sought in order to access it. However, only those who desire to go camping are actually required to seek permission. This is just a formality because there is no record of anyone having been refused access to the island. So, rent a boat and head out across the waves with your love!